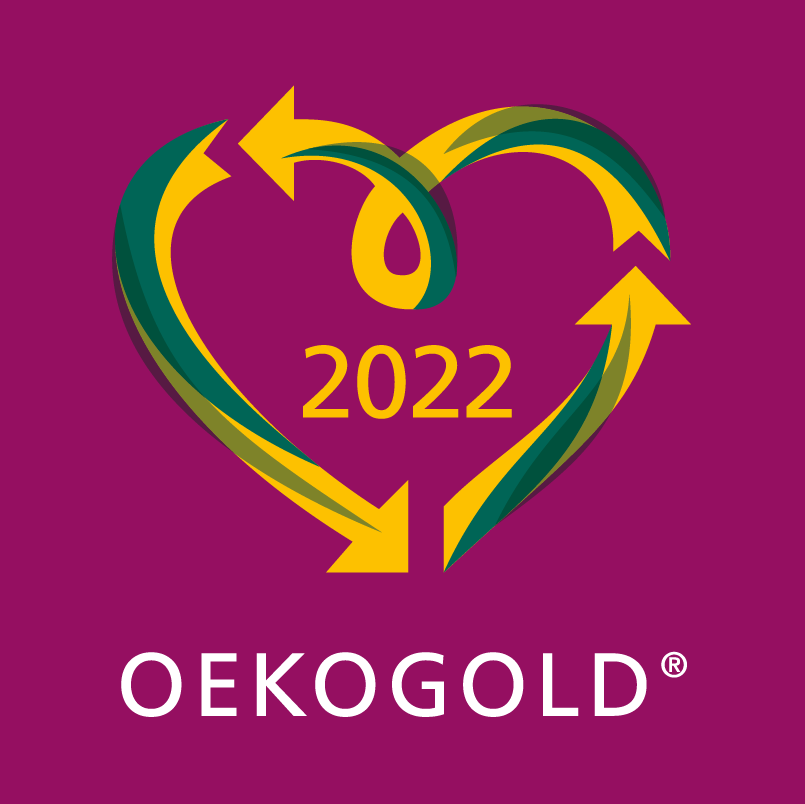 Paul Brent has been certified with the Oekogold label since 2016.

Swiss goldsmiths and jewellers certified with this eco-label use only recycled precious metals when making jewellery. The precious metals used come from a source that has been certified by the Responsible Jewellery Council, which guarantees the use of precious metals obtained only through recycling.

Not only does the fine gold from a piece of jewelery come from a safe source: even palladium or the silver and copper needed for soldering are secondary raw materials from recycled sources.

Unlike with mined gold - whether fair or not - no more livelihoods are being destroyed. From the purchase and recycling of old gold to the production of raw materials and to the sale of new jewelry, human rights are respected. Without a gap. Guaranteed.

Read more about the label on their website (in German): www.ekogold.ch

UNIcréa and the Castle of Morges 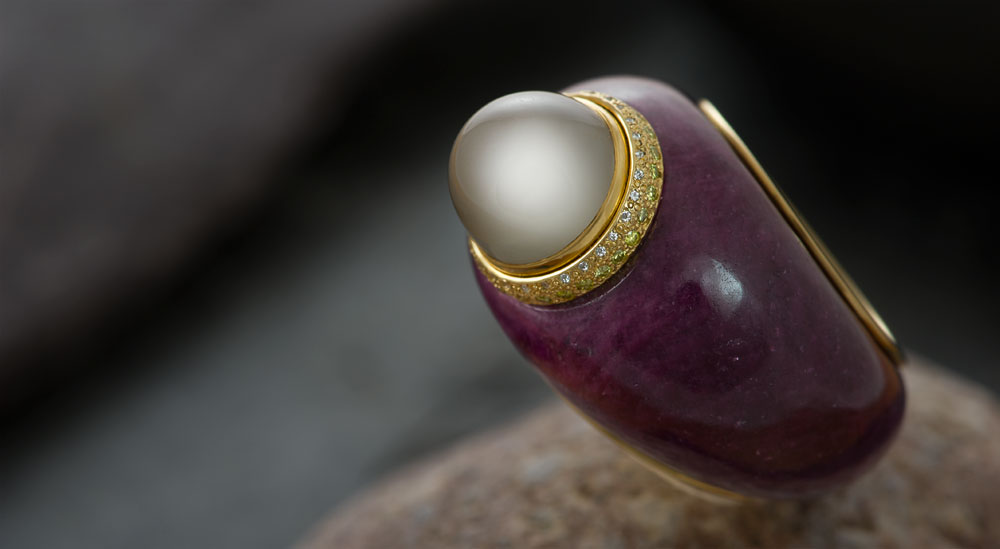 At the end of April 2016, Paul exhibited his work at one of Switzerland’s most exciting exhibitions: UNIcréa hosts 100 selected artists who show their latest collections in a Swiss castle over four days, twice a year. This 21st edition of UNIcréa took place at the Castle of Morges on the shores of lake Geneva.

Paul created a unique piece of jewellery for the theme of this exhibition, which was Viser la Lune (aim for the moon). He forged a ring by cutting a ruby from a Tanzanian motherstone and then shaping and polishing it, all of which took him over ten hours. In addition to this, the ring features a moon stone (the moon) set into 18ct yellow gold and white and yellow diamonds set around it (representing the sun). Paul truly reached for the moon with this unsual and challenging piece.

Paul would like to extend his gratitude to the visitors who took the time to visit the stand and to all those who continue to show support and appreciation for his work.

UNIcréa took place at the Château de La Sarraz for the third time in a row in November 2015, which means that Paul stole the public’s heart each time he exhibited at La Sarraz!

This time around the theme of the show's competition was Comme Une Nouvelle Vie or Like A New Life.
After spending an inordinate amount of time pondering the theme and what he could create, Paul made a necklace forged from recycled jewellery – broken bits, abandoned pieces, forgotten things – to give them a new life. He spent over 40 hours working on this 18ct gold hand-made necklace studded with the following: Tahitian keshi pearls, lapis lazuli, an ethiopian opal, a garnet, an amethyst, a round Tahitian pearl, an aquamarine, a citrine, an australian opal, a prasiolite, and diamond beads.

Rather than simply look at a couple of pictures of it, why not have a peek at the process that goes into making such a piece? Julia spent a week with Paul, filming the process. The video below is only a snapshot of all the work that went into making the finished piece…

Additionally, you can read (in German) the article in the local newspaper about his third victory in a row, here: Goldene Zeiten für Goldschmied.

Paul Brent in the press 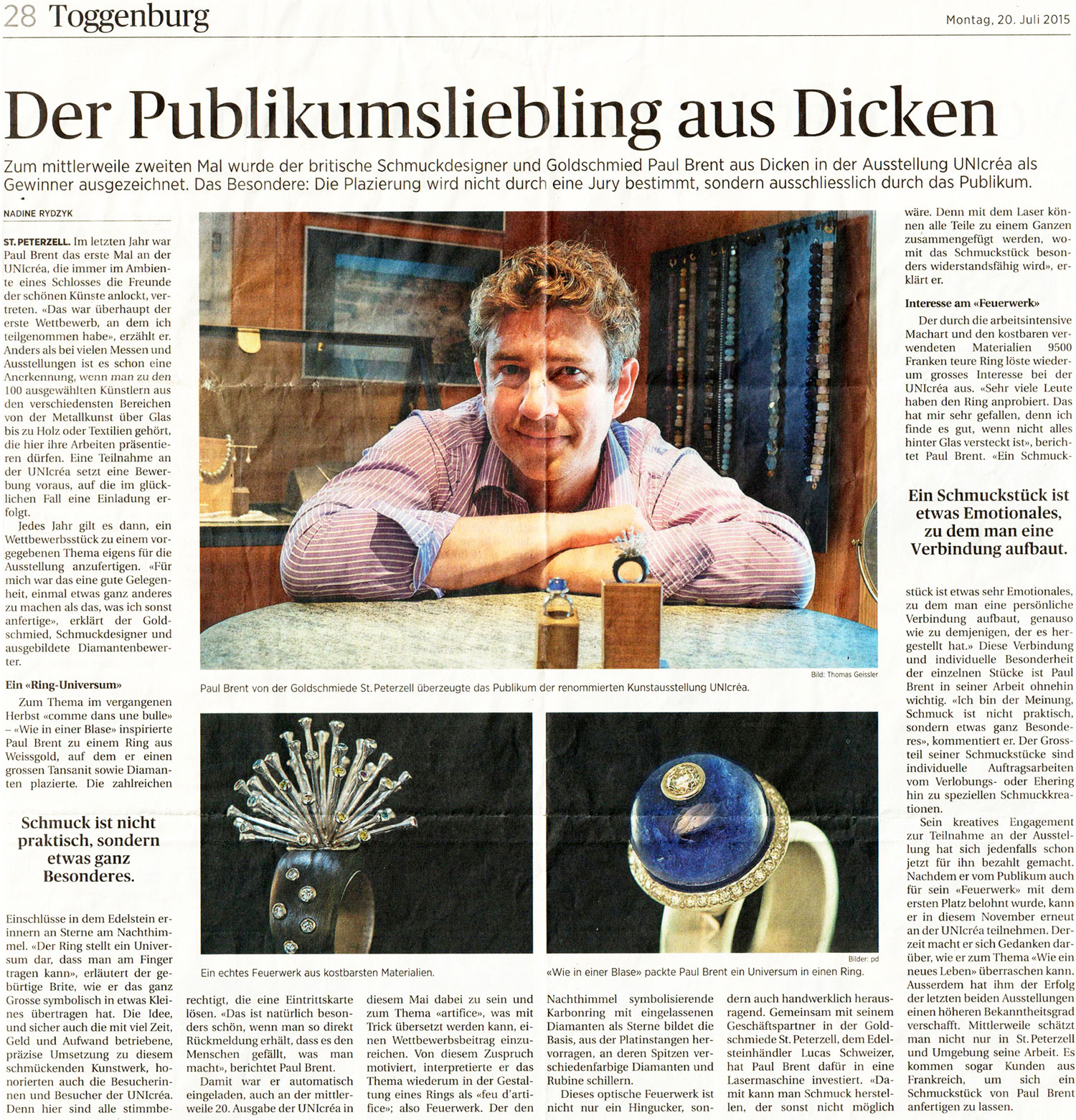 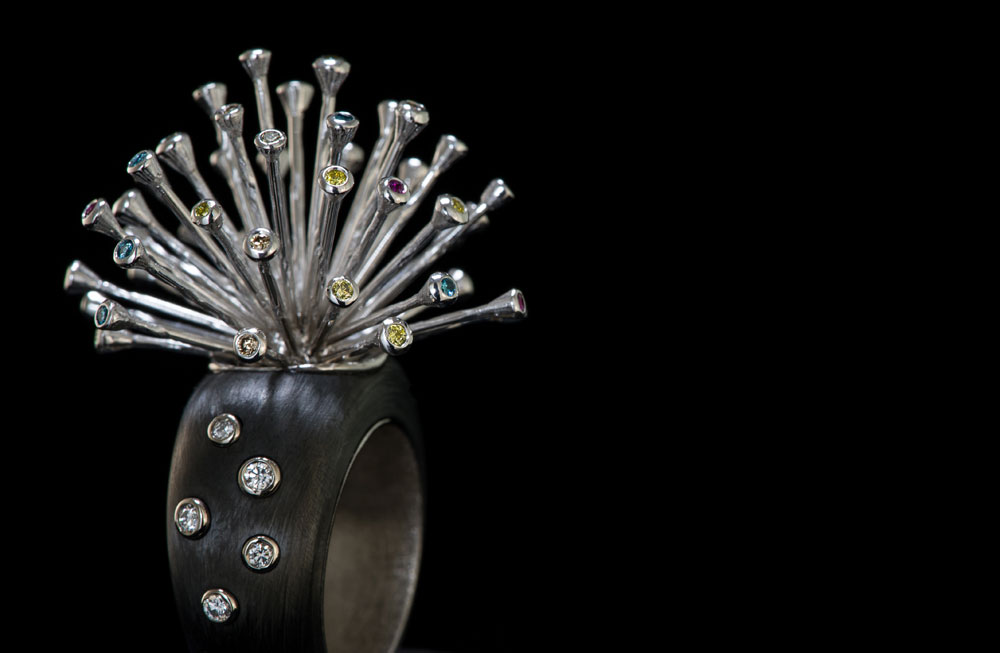 From May 7th to 10th 2015, Paul had the wonderful opportunity to take part in his second UNIcréa exhibition.
Held at the Château de La Sarraz, he met many new faces and had the chance to catch up with some incredibly talented artists from last year’s UNIcréa. As in 2014, the exhibition brought together some 100 artists from various backgrounds and allowed them to exhibit their work to lovers of art and design in a unique setting.

For each edition, the participating artists are invited to create a piece on a given theme. This time around it was Artifice.

Paul designed and made a ring in carbon to symbolise the night sky, set five brilliant-cut diamonds in white gold on both sides of the shank to act as stars in the sky, laser soldered 46 platinum stems through the shank onto the inner white gold ring, and set a fancy coloured diamond or ruby in white gold on the end of each stem – to create a multi-coloured firework, or feu d’artifice in French.

The votes for this public competition are cast by the visitors as they exit the exhibition. Paul is very happy to announce that he was once more crowned winner of the competition and will hence have a guaranteed spot at the 20th edition of the UNIcréa exhibition, which will take place from the 5th to the 8th of November 2015 in La Sarraz.

" Thank you for your continued support and appreciation for my work.
None of this would be possible without you. "
- Paul Brent

Goldschmiede St. Peterzell in the press

Link to the article online (in German):
Wieder Leben in der Goldschmiede 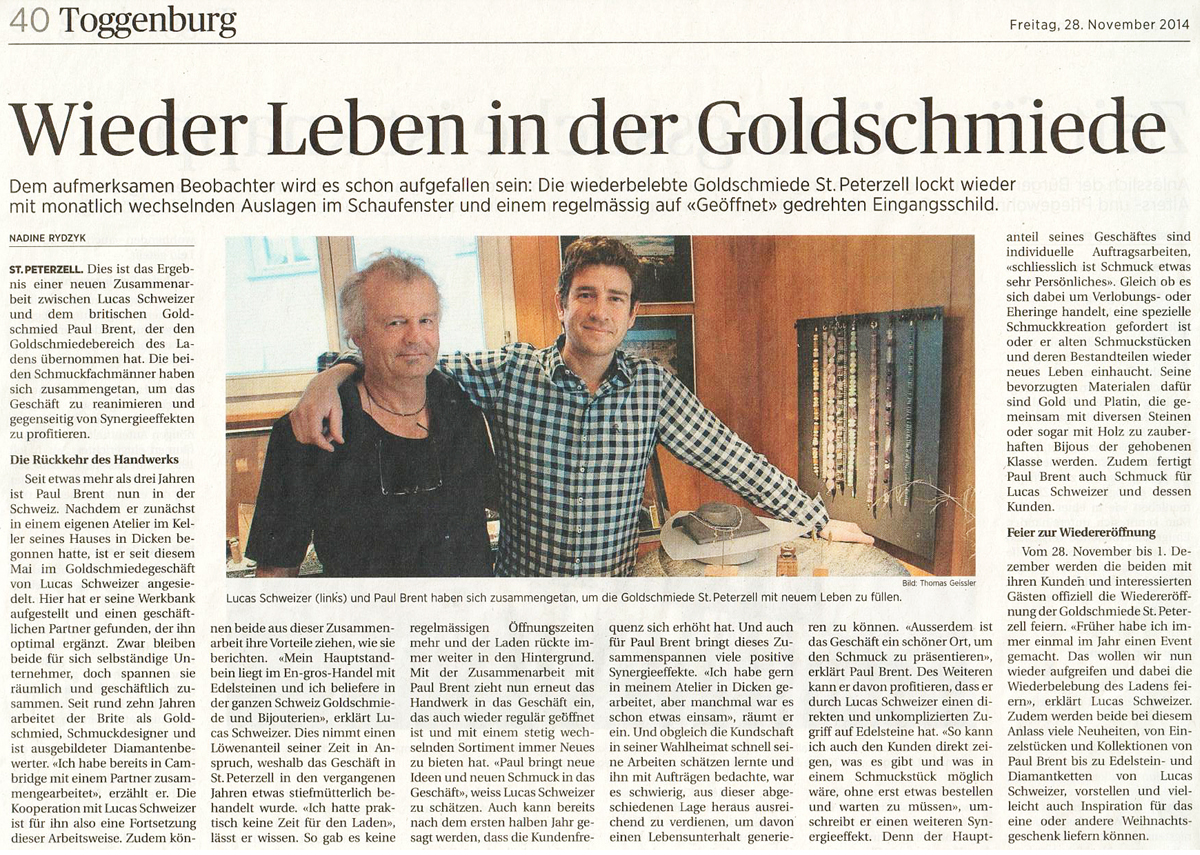 Winner of the UNIcréa competition 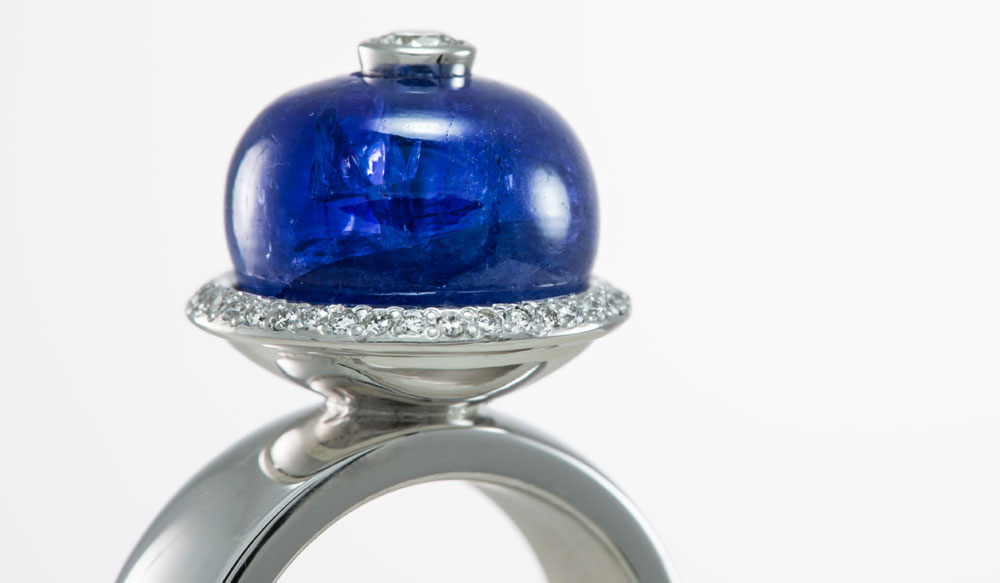 From October 30th to November 2nd 2014, Paul participated in a wonderful event held at a castle in Switzerland: the UNIcréa exhibition brings together some 100 artists from various backgrounds twice a year and allows them to exhibit their work to lovers of art and design in a unique setting. The 18th edition of the exhibition was held at the Château de La Sarraz and was a resounding success.

For each edition, the participating artists are invited to create a piece on a given theme. This time around it was Comme Dans Une Bulle or Like in a Bubble. Paul designed and made an 18ct white gold ring with diamonds and a tanzanite for this themed competition. He wanted to showcase how the inclusions within a stone can be seen as much more than simple faults: the inclusions within this tanzanite reminded Paul of the night sky and its endless stars and distant galaxies… a universe – like in a bubble – that you can wear on your finger.

The votes for this public competition are cast by the visitors as they exit the exhibition. Paul is very happy to announce that he was crowned winner of the competition and will hence have a guaranteed spot at the 19th edition of the UNIcréa exhibition, which will take place in the spring of 2015.

Paul would like to extend his gratitude to the visitors who took the time to vote and to all those who continue to show support and appreciation for his work.

Paul Brent in the press

Link to the article online (in German):
Ein Traum ging in Erfüllung 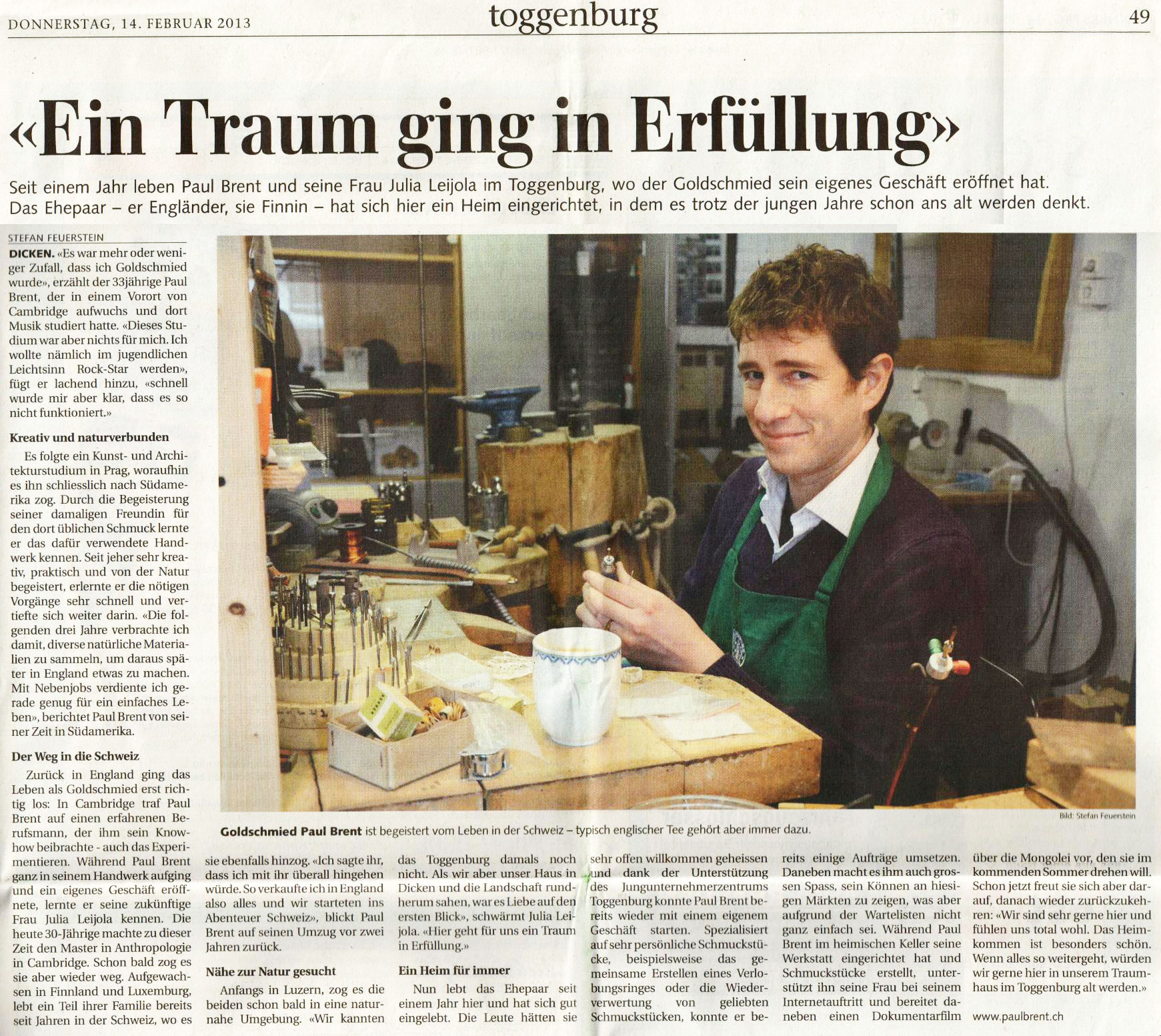